The Pediatric Life Support (PLS) task force of ILCOR would like to provide an updated evidence review and commentary on the recommendations for pediatric post-cardiac arrest temperaturemanagement. This follows the recently updated consensus on science and treatment recommendations for Temperature Management in Adult Cardiac Arrest by the Advanced LifeSupport (ALS) task force.

We suggest that for infants and children who remain comatose following ROSCfrom OHCA and IHCA, targeted temperature management be used to maintain acentral temperature of 37.5 °C or less (weak recommendation, moderate-certainty evidence).

On the basis of 2 randomized trials and 8 retrospective observational cohortstudies that provided comparative data on favorable neurological outcome, survival, and in-hospital adverse events, there is inconclusive evidence to support or refute the use of therapeutic hypothermia (32 °C to 34 °C) compared with therapeutic normothermia (36 °C to 37.5 °C) (or an alternative temperature) for children who achieve ROSC but remain comatose after OHCA or IHCA.

In the original CoSTR (5) the PLS task force reported a preference for the use of induced hypothermia32°C to 34°C as opposed to active control of temperature at normothermia 36°C to 37.5°C for OHCA. There were insufficient data on patients with IHCA to make a preference in that population. The taskforce also noted that fever is potentially harmful and should be avoided.

On Sept 7th 2021 an Evidence Update was performed by the PLS task force following the original search strategy and research question published by Buick et al. (2) No new RCTs were identified.Eight additional publications fulfilled inclusion criteria; however, seven were secondary analysis ofsubgroups of the Therapeutic Hypothermia After Pediatric Cardiac Arrest (THAPCA) RCT primary trialdata for the OHCA, IHCA or combined cohorts. (6-12) One new retrospective observational cohortstudy was identified from Australia comparing induced hypothermia (<35°C) and normothermia (36-36.5°C). The THAPCA secondary analysis data showed no difference between temperature groups(32-34 versus 36-37.5°C) in any of the following subgroups; ECMO or ECPR, hypotension post-ROSC, open chest resuscitation, combined cohort OH and IH and acute kidney injury. In the Australian study by Magee et al, there was no difference in survival; however, after regression adjustment, induced hypothermia was associated with significant improvement in two health related quality oflife measures (higher physical and psychosocial scores). (13) The task force did not identify sufficient new data to proceed to repeat the full systematic review and the task force no longer wished to express a preference.

The main treatment recommendations from the ALS task force CoSTR, Aug 30th 2021, were updated following a task force led systematic review by Granfeldt et al (14) and the publication of the ‘TTM2’study (15) and can be found here [https://costr.ilcor.org/docume...]. They suggest, in adults, actively preventing fever by targeting a temperature ≤37.5 for those patients who remain comatose after ROSC from cardiac arrest (weak recommendation, low certainty evidence) and acknowledge the uncertainty of whether subpopulations of cardiac arrest patients may benefit from targeting hypothermia at 32-34°C.

Although the PLS and ALS task force recommendations are similar, it is important to highlight thatthere are notable differences between pediatric cardiac arrest and adult cardiac arrest populations.First, pediatric studies of OHCA often focus on all etiologies of cardiac arrest (predominantlyhypoxemic etiology) compared to the majority of adult studies focusing on a primary cardiacetiology. Secondly, pediatric IHCA occurs predominantly in the populations already cared for in the intensive care setting, while adult IHCA is almost evenly distributed in intensive care and non-intensive care settings. Thirdly, most pediatric OHCA and IHCA occur in the younger pediatric agerange, and there are sufficient developmental biology and epidemiology differences between adults and children to support that adult study findings and recommendations may not be applicable to the pediatric population.

The PLS task force recognizes that there remains uncertainty about the application of temperature management in pediatric IHCA and OHCA (target temperature, timing, duration, technique); moreover, in circumstances where hypothermia may be considered, there is still no evidence to guide rewarming. Further pediatric research and clinical trials are urgently needed to answer these important questions. 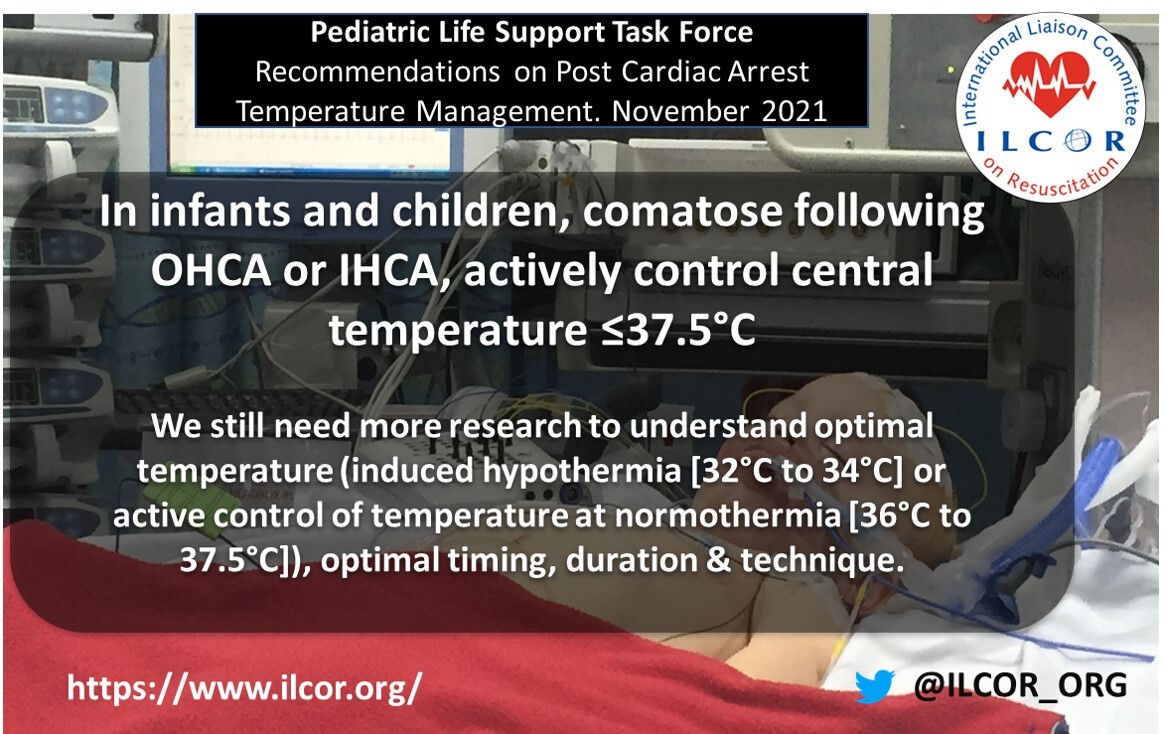